During a bit of a rough ride to Koh Tao on the ferry, you might have felt queazy or even thrown up. You may have been experiencing sea sickness caused by the motion of the ferry. Excited for your diving course, you might be asking how to avoid sea sickness while scuba divine. This is a very valid question. Can you cure sea sickness? It is often described as true misery and the fear of it alone can cripple people completely. But never mind, here are a few tips for sea sickness. 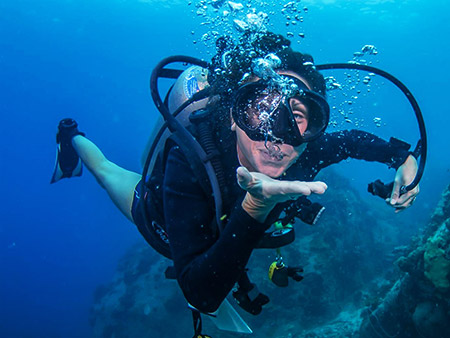 What is Sea Sickness?

Albeit there not being much research, the most common theory for the cause of motion sickness or seasickness as it were, is the inability of the human brain to process the conflicting signals it is receiving from ears, eyes and body. Particularly the vestibular balance apparatus of our ears is sensing the constant angular acceleration on a rocking boat and even the wave and surge movement whilst immersed in water, which signals motion to the brain. This motion is not easily confirmed as we might be sending a different visual signal. Especially if we are inside a cabin, reading a book or playing on a smartphone.

The initial response is subtle, yawning, a paler appearance and a headache, this, in turn, causes anxiety and confusion. When the symptoms intensify, nausea, vomiting, and vertigo in extreme cases follow. This normally triggers a fear response and a feeling that the victim cannot help their current misery. Often this fear and “giving up” intensifies seasickness further.

Prevention is the best cure, otherwise, early recognition and action will arrest the development of seasickness.

Being hydrated is already paramount when scuba diving. Hangovers and general dehydration will make seasickness worse. Keep your fluids topped up. Avoid drinking a large amount of water in one go and continually take small sips of cool water to keep your body as hydrated as possible.

2. Have A Light Meal An Hour Prior To Boarding

An empty stomach is normally more sensitive to irritation, so having a light meal can help to settle your stomach. Avoid really spicy foods or a very heavy meal.

There are tablets that cure motion sickness. Most of them have side effects such as drowsiness, which is not ideal for scuba diving, however if you take them well in advance, your body can accustom itself to the drowsiness. Another common choice for people is to wear a sea sick patch. These also work to varying degrees on people, however are not suitable for scuba divers.

4. Find A Fixed Point At The Horizon

Probably the most common suggestion when someone is trying to aid a seasick person is to gaze at the horizon. Out at open sea or in very foggy conditions this is not always very effective. If you are close to land, you can use that as your fixed reference. It is recommended that you look in the travel direction as this will visually confirm the motion detected by your vestibular balance apparatus in your ears.

5. Reduce Motion As Much As Possible

For most people vertical acceleration is the most intense felt angular motion. In order to avoid excessive motion input. Ask the crew on the boat where it is best for you to sit in order to reduce the amount of motion. Generally this is the centre of the boat and on a lower deck.

6. Get Some Fresh Air

Strong smells, especially exhaust fumes or food accelerate and intensify seasickness. There are more inputs for your brain to process, so the best thing to do is to try and get fresh air.

Don’t let yourself go. I have seen it many times, when someone shows the first signs of seasickness, fear takes over and then that person lets seasickness take over. Acknowledge that you feel a bit queazy, seek help and deal with it. Don’t panic as this makes it worse. Talk to people, feeling alone with seasickness intensifies the feeling of hopelessness.

Seriously? Yes, chewing on a fresh piece of ginger can do wonders. Also, there are no side effects to this, so if it doesn’t work, no harm done. The placebo effect can be powerful with seasickness as it helps to manage the anxiety and fear of the condition. Mint has a similar effect and Coca Cola is generally believed to settle the stomach, which may help. Some people will swear that Coca Cola and fizzy drinks make it worse.

It goes without saying that the sight and smells of others vomiting is not going to help your situation. So in order not to turn into a dribbling mess in a group of seasick people, remove yourself and take action.

For some it is all too much and the fear takes over hindering that person from deep slow and regular breathing. If you find yourself to be breathing irregularly or even hyperventilating, you need to focus in order to get your breath under control. If you starve your brain of oxygen it will be more difficult for you to deal with the condition.

At night time it helps to close your eyes to reduce the amount of input conflict as you are not contradicting the motion detection with mismatching visual inputs. Some people believe this makes it worse. You can try looking up at the sky during the day. Tilting your head back reduces the motion detection intensity.

Fighting the motion can make it all worse. Embrace the sea! Tell your brain that you are in fact on a ship, study the waves and get a feeling for the pitch, roll and vertical acceleration of the boat. Avoid trying to fix yourself and rock with the motion.

So, there you have it. There are countless other ways to avoid sea sickness when scuba diving. The fear of sea sickness should not be a reason for you to not try diving. DAN has written a comprehensive article on this topic if you want to learn more about the medication you can take. Talk to your instructor about it, chances are we have been seasick ourselves before or have definitely witnessed and helped a fellow sea sick diver.

Now that you are confident you can withstand this sickness, check out our diving courses.

Lionel quit his job in 2013 and bought a one way ticket to Asia. The plan was to travel for 3 months, then find work and live in London as an expat. On his travels, he fell in love with diving and is currently a Master Scuba Diving Trainer at Sairee Cottage Diving writing blogs when he’s dry.