The latest disaster-documentary released on Netflix had me on the edge of my seat for an hour and a half. Chris Lemons’ death defying story in the Last Breath movie is simply astonishing. Under normal circumstances, a human brain will take permanent damage if it is deprived of Oxygen for around 6 minutes.

He survived without breathing gas for over 30 minutes.

We often forget that our ocean is almost as extreme to explore as outer space. We have easy access to it, we can swim in it, and for limited times explore its depths.

But below 40 meters we already require specialised training and equipment.

The deepest point in our ocean is 11,030 meters according to NOAA. An environment that appears as hard to reach as outer space.

Chris Lemons and his crew are saturation divers that conduct maintenance work on oil fields in the North Sea at depths of around 100 meters. In order to do this, they are required to spend 28 days in a saturation tank on board their vessel. This is how they saturate their body tissues to the breathing gas they will breath at depth.

From their diving bell they gear up in their commercial diving gear attached by an umbilical cord. This cord supplies them with breathing gas, warm water, light and comms. It is quite literally their life line.

Chris describes his favourite part of the dive as stepping off the platform below the diving bell. There is nothing but his torch beam reflected by particles. Surrounded by blackness he descends to the seabed in a free fall. This is where his working day begins. 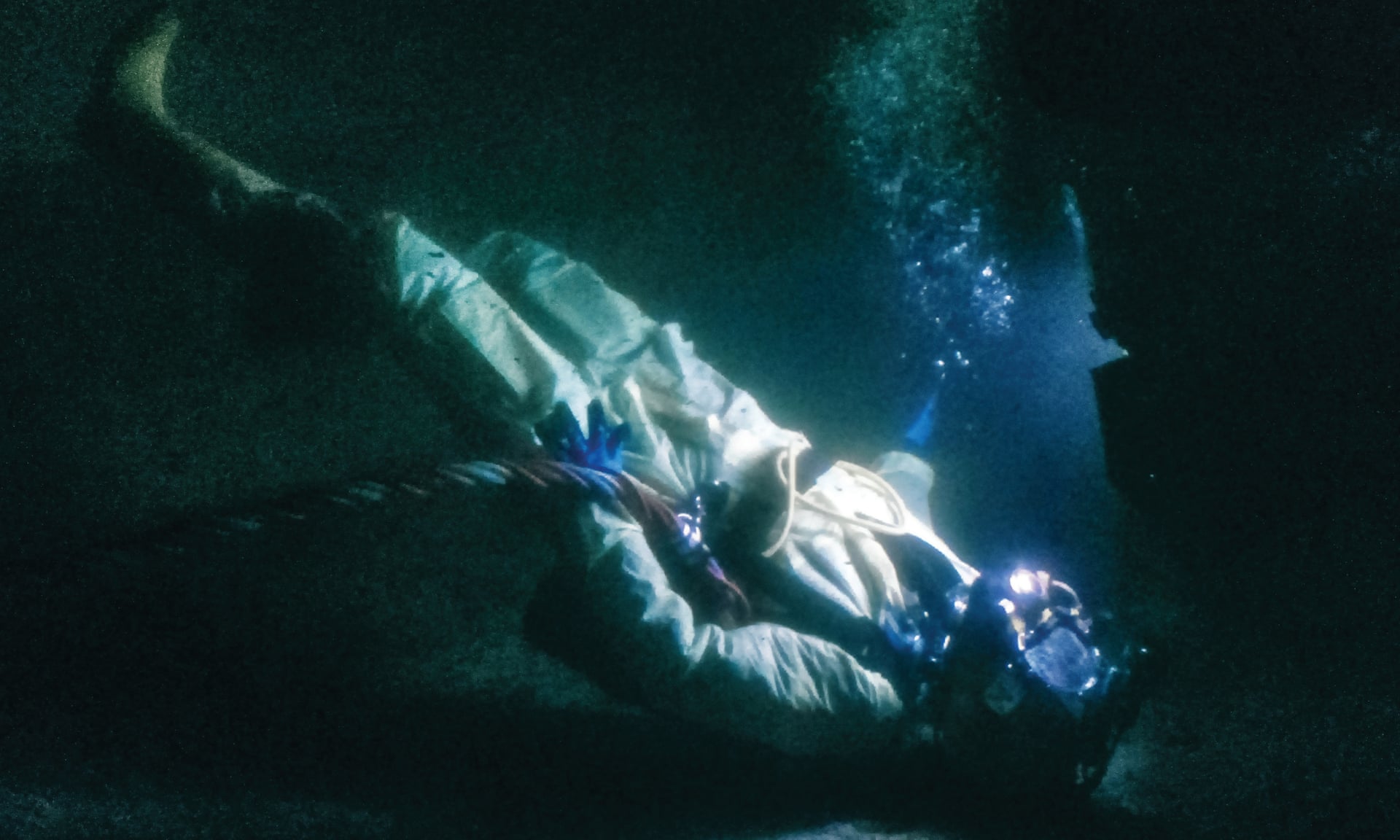 A reconstruction of Chris Lemons’ situation on the bottom of the seabed without breathing gas.

The Disastrous Turn of Events

A fully computerised system keeps the diving vessel over an exact point on the seabed even in large swell. It is when this computer system (Dynamic Positioning System) fails that divers below can get into serious trouble.

Being submersed at depth without breathing gas is the worst situation a diver can find themselves in. Chris Lemons is left in the dark and cold with an emergency gas supply lasting about 5-6 minutes when his umbilical jams and rips.

What really got me is his current situation. He is a mere 90 meters from the surface, however so alone and isolated from the rest of the planet. On the seabed with nothing but a few minutes of breathing gas and himself. Even if he survives his out of air situation, he is days of decompression away from leaving his saturation environment. His isolation is claustrophobic in every sense of the word.

The Leap of Faith

There is no other way to describe this. He has no light and no idea which direction the working platform is. If he somehow reaches the platform his team has a very slim chance of rescuing him. His situation is like a second birth. The severance of the umbilical cord followed by a leap into the unknown. There is one vital difference however. Chris Lemons is 100% aware of his situation and the fragility of life at this very moment.

He picks a direction and walks into the void. A feeling, an instinct or simply pure luck guides him miraculously in the right direction. He reaches the platform and climbs to the top of the structure, 7 meters from the seabed.

He takes his last few breaths and has no choice but to curl up and surrender to nature. After all nature selects.

Due to the hostility of the environment his team is extremely limited in what they can do. However they do not give up on him. The haunting search for Chris using their ROV is the desperate search for order, the want for everything to be ok. Finally, their reaction when the ROV reaches Chris and transmits his image to their monitors can only be described as pure naivety in the face of chaos.

It is a haunting image of man versus environment. As Chris is asphyxiating his hands do appear as though he is waving or reaching out. His colleague Dave describes what he was thinking when he rescued what he ultimately thought was a “dead guy” on the bottom of the ocean.

The crew’s absence of emotional response to the situation and an almost pure rejection of the severity of it is the little bit of order in the chaos of the reality they are living at that moment.

It is this state of nature that animates bellman Duncan to give all but two rescue breaths to Chris as he finally reaches the bell. It is these two breaths that bring him back to life.

The Science behind the Last Breath Movie

The most commonly agreed upon reasons for Chris’ survival have to do with his environment. Chris spent 28 days saturating his entire body tissues to around 11 bar of Heliox, a mixture of Helium and Oxygen. His body may have been able to use some of the Oxygen in his body tissues to sustain brain function. In addition to this, his brain cooled rapidly enough to prevent permanent brain damage and reduced the metabolising of Oxygen in general.

I really recommend the Last Breath movie. It is a gripping tale of survival. A solid reminder of how fragile life can be.

Chris and his crew perform extreme diving in extreme conditions. This is far different to recreational diving. If you want to awaken the explorer in you, start with the first level diving course we offer.

Lionel quit his job in 2013 and bought a one way ticket to Asia. The plan was to travel for 3 months, then find work and live in London as an expat. On my travels I fell in love with diving and I am currently a Scuba Diving Instructor on a tiny island in Thailand. Occasionally I share parts of my story on my travel blog over at two green backpacks.