How we located and removed a large ghost net covering Shark Island. At Sairee Cottage Diving we pride ourselves on what we do and our customer satisfaction is very important to us. This quickly becomes obvious when diving with any of our dive masters who always try and find the best marine life and the harder to find critters for you to see.

Recently, Dive Master Gal was doing just that when leading a dive at Shark Island. He decided to take the dive a little further afield, searching the muck for something out of the ordinary. Unfortunately, what he found was a ghost net approximately 25 meters long. It was being held up, about half a meter from the bottom, by a series of floats. Although a boat was not dragging the net, it was still capable of catching plenty of marine life, which would be left there to die. Gal and the rest of the divers observed a few rabbit fish and a blue spotted ribbon tail ray already caught within the net. The poor ray was thrashing around violently which made it unsafe to approach with students. Usually the blue spotted ray is very shy and keeps its distance from humans. However, if it feels threatened, it will strike and release its venom. This poor blue spotted ribbon tail was born innocent never imagining injuring a human and here it is slowly suffocating in a human ghost net.

The next day Gal, and any available members of Sairee Cottage staff, took the small boat on a mission to remove the net and to try and save any marine life stuck within. Removing the ghost net would also prevent more marine life getting harmed and caught in the ghost net. Gal led the group, Dana and Jordon assisted while I provided some help as well as taking photos to document the event. We began the mission with a long safety briefing and a detailed description, given by Gal, so we knew what to expect when we arrived. With a depth of 22 meters, bottom time was limited.

With conditions being considerably worse than the previous day, it took a little while to find what we were looking for. During the night the current had bundled up the net making it easier for us to lift if to the surface. This had, however, caused the net to drag some smaller corals and a couple of big hermit crabs. 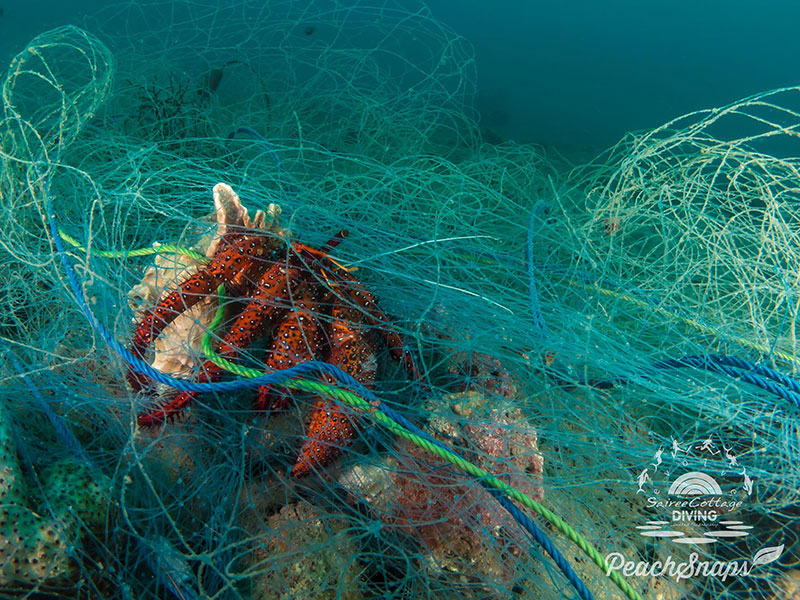 More and more photos of marine life are photos such as this one. Stuck in a ghost net, never intended to actually be eaten.

As we had already discussed on the boat, the primary concern was to remove the net before more marine life became entangled. Gal, Dana and Jordon worked from one end, rolling up the net and removing marine life, rocks and corals. This strategy allowed us to remove the net within our bottom time. The first dive was spent preparing the net for removal but Gal quickly realised that it would be far safer and easier to cut the net in two and have two teams lift each half. After a brief surface interval we dropped back down following a surface marker, left on the first dive, so as to not waste time. This time around, it was all hands on deck! The net was large and heavy so I left the camera behind to help with the lift. A lot of debris remained in the net but, as decompression limits approached, priority was to check that nothing was living in the net before the lift bags were attached and the net was slowly brought up to the surface. Sadly, the ray that was spotted the previous day had already died. After a lot of huffing and puffing by the boat crew, the nets were finally dragged up onto the boat. 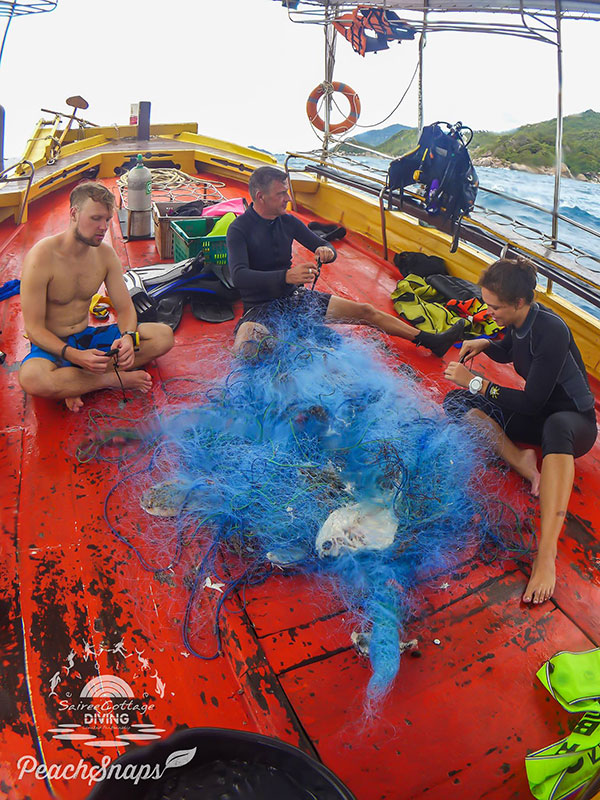 During the boat ride back to the shop, any rocks and damaged coral were removed and put back in the water. We discovered a large hermit crab which, looking happy, was put back into the water. The captain explained to us that this net was the kind that the long tail drivers use to fish close to the island. 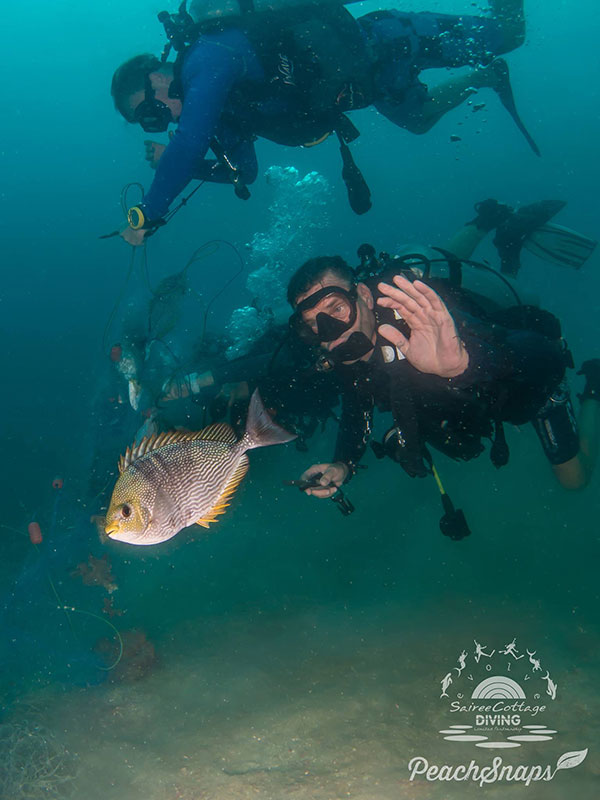 A lot of marine life could have continued to die in this net had we not removed it quickly. This net is one in a million. Most abandoned fishing nets are much greater in size and they pose a great threat to marine life and divers. If you spot a net on a dive, alert your dive guide or local dive shop so that it can be removed safely. Do not attempt this on your own, as entanglement can be a real danger. A trained team, working together, should always remove nets.

A few of our ghost net clean up dives are archived on Ghost Fishing.